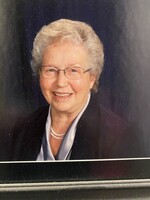 Ruth was born in Waynesville, NC to Frank Jesse Warlick and Molly Norman Warlick. She was the oldest of seven siblings. David followed then Susan, Jean, Daniel, Frank and Steven. She grew up surrounded by many relatives who lived nearby.

When she was 19 years old the family moved to Umatilla Oregon. She had two young boys at that time, Tom and Dan. Later came, Joy, Debbie, Michael and Mary. In 1954 the family moved to Hood River where she met Lars Edward Medhaug. They were married on May 5, 1962. He remained a dedicated and loving husband for 60 years, and a father figure to her children to this day.

Ruth had a strong work ethic. She was rarely idle and efficient in all that she did. She worked many years as a waitress, managed several apartment complexes, and ultimately became the manager of Creekside Retirement home in Beaverton, Oregon and then Beaverton Lodge Retirement Home. This required much organizational skill, diplomacy, and intelligence all which she handled with grace and dignity. Ed was also a vital part of the job.

When they retired they moved to Elgin, Oregon where they had a small farm and house. She was free to live her passion of gardening, tended a few farm animals, did copious amounts of canning, and enjoyed her grandchildren. She was very active in the local Baptist Church, always ministering in some capacity. She had a big heart and a steadfast love of the Lord. Everyone who met her was impacted by her generosity. When they could no longer manage the farm work they moved to The Dalles. Their son Tom and his wife Dawn were a constant source of support to them.

Ruth and Ed’s last place of residence was in Alexandria, Louisiana where they were close to her youngest son Michael. It was here that she took ill and her time on earth was coming to an end. Her beloved husband Ed, son Michael and his wife Jere, daughter Debbie and step daughter Darlene lovingly ministered to her for the last several days of her life. She died quietly and peacefully in her sleep. There will never be another one like her.

Please do not send flowers. You can honor her by planting a tree or shrub if you feel so inclined.

Visit www.AndersonsTributeCenter.com to leave a note of condolence for family.


copy the Zoom meeting URL below to your web browser and the passcode is; Ruth
*if you have any questions or difficulty accessing call our office (541) 386-1000