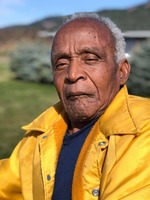 He was born on November 20, 1940, in Grayson, Oklahoma, to Lester and Theressa Matthews.   James was the second child of twenty-two children of the Matthews family. In 1949, the family moved from Grayson, Oklahoma to Eloy, Arizona where he worked as an agriculture worker to help support the family.  After long hours of work, James would always take time to assist his siblings with schoolwork, even though he only had a 6th-grade education.

When his family moved to Hood River in 1960, he went to work in various agriculture industries in the Hood River Valley.  Shortly, after the family settled in Odell, James became employed with the United States Forest Services, as a Forestry Service Engineer and became an active forest firefighter.  He retired after many years of employment with the US Forest Service where he learned to love the outdoors. He enjoyed hiking the surrounding forest trails in the upper valley, many of which he had helped create as a forest service employee.

After James retired, he was passionate about attending church services and committed himself to help his family and community by making a difference.  After the family house fire in 1982, James was instrumental in helping to rebuild the former schoolhouse as residential living quarters.  James was a major pillar and point of contact for planning and decision-making for his family.

In the 1990s, James joined the Hood River Valley Lion’s Club to become involved in the community at large.  James helped develop one of the first-ever recycling programs to separate plastics and paper for rural garbage pickups.  He was involved in projects to coordinate and revitalize school bus stop protective stations.  He helped form a program to assist challenged young schoolchildren to volunteer in the community as an opportunity to learn and grow.  He supported and worked at the annual Hood River County Fair, he assisted with 4-H and Future Farmers of America activities and could be found helping with the Lion’s Club snack wagon during high school games and events.  James was presented and awarded with many accolades for his innovation and dedication to the community, including several “Melvin Jones” Honorary Awards for his outstanding volunteer work.

James was a gentle and quiet spirit but spoke profound words of wisdom and knowledge.  He was dedicated to his religion and his relationship with God was an important part of his life as a man of God who lived life with dignity, honor, and respect for everyone.  He always found time to stop, listen and provide words of wisdom. He had a love for writing and reading poetry.  He will be missed by everyone who knew him.

A celebration of James’s life will be held 11:00 A.M., Wednesday, May 18, 2022 at Anderson’s Tribute Center with a procession to the Upper Valley Cemetery in Parkdale, Oregon for his burial.  Following James’s burial all are welcome to the reception and time of continued sharing at the Hood River Fairgrounds.

A time of viewing and time to greet with family is planned for Tuesday, May 17, 2022 from 6:00 p.m. to 8:00 p.m. at Anderson's Tribute Center.   James's Reflections of Life tribute video will also be shown at this time.