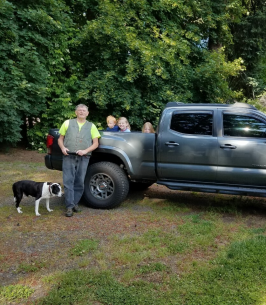 He graduated from Wy'east High School in 1972. After high school, David joined the Navy; he was honorably discharged in 1973. David went on to work at several places, including Wind River Nursery and Mt. Hood Meadows.  He became an employee of Diamond Fruit Growers in the fall of 1980 and stayed with the company until 2015.

David enjoyed nature. He spent time hiking, mushroom hunting, fishing, observing wildlife, and caring for his pets. He also spent time playing guitar, reading, and drawing. In his younger days, he skied, rode horses, and rode motorcycles. He had an amazing ability to remember jokes, stories, and scriptures. David liked to chat and spend time with family and friends. He very much enjoyed making memories with his grandchildren.

All go unto one place; all are of the dust, and all turn to dust again.
Ecclesiastes 3:20