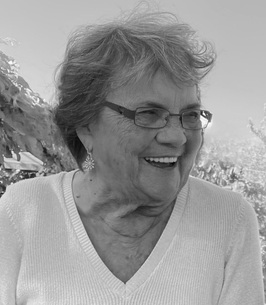 Darlene Jessie Scroggins, 84, died in Portland, Oregon May 15, 2022, at Providence Medical Center Hospital due to complications from an aneurysm, with her three surviving sons at her side.  Darlene was born June 29, 1937, in Spokane, WA, the daughter of William Louis and Jessie Anna (Whorrall) Smith and was the eldest of four sisters.

Darlene graduated from Roosevelt high school, Class of 1954.  Crowned Queen of the Lake City Pioneer Days, Darlene became a princess for Seafair, the gala annual Seattle-King County water festival that continues today.  As family lore goes, she was fitted with the gown and crown to be coronated Queen of the Seas but as she was not picked up by her father the evening before the coronation, but by her boyfriend, this infraction ‘stripped’ her of her crown.  Either way, she remains Queen in all our hearts, regardless.

After high school, Darlene visited a cousin in White Salmon, WA where she met Larry Monroe Scroggins and they were married shortly thereafter in Seattle, WA in June of 1955.  Married for nearly 40 years, Larry preceded Darlene in death in 1994 while living in Heppner, OR.

As an enlisted Navy man, Larry and Darlene moved to the navy base in San Diego, California and had their first son, Larry.   Later, they moved back to Seattle, and Darlene briefly worked at Boeing before she went on to have three more boys, Jesse, William (Willy) and Lloyd.  They moved to Portland in the early 60’s where together Darlene and Larry opened their own company called, Floor Design Contractors out of Multnomah Village, where she worked the books and Larry worked the labor.

Raising four rambunctious and athletic boys, Darlene actively volunteered in all their activities as did Larry who coached most of their team sports.  An avid member of the community, Darlene started the district 4 Little League softball program and was integrally involved in Regional Series Softball.  Darlene was also one of the driving forces of bringing the Softball World Series to Alpenrose Dairy; she was specially honored at the 40th Anniversary in 2016 at the same time her granddaughter, Taitum was playing on the main diamond.

Aside from team sports, Darlene was a fixture on Mt. Hood where she volunteered as an Alpine Race Administrator for timing & calculations as her sons skied for Mt. Hood Race Team (MHRT).  Never a skier growing up, she and Larry jumped right into the sport when their son Jesse took to the sport and decided to make it a family affair which resulted in a lifetime of passion, fueled in part to the unconditional dedication she had for her family.  As an experienced seamstress and regular at Daisy Kingdom, Darlene even made all her sons ski clothing too, including ski pants, shells, and downhill suits.  She could do it all.  In the 70’s, Darlene became a member of the Skiyente Ski Club, a decades old woman’s social club for active women on Mt. Hood dedicated to supporting skiing, ski racing and all things related to winter activities.   She was also a board member with the Pacific Northwest Ski Education Foundation that provides funding and supports competitive Alpine and Nordic athletes, coaches and officials and clubs in the Pacific Northwest Ski Division. In 2005, Darlene was coronated “King Winter,” in Government Camp, OR where she was honored for her significant contributions to snow sports and the mountain community during her lifetime.

After Larry’s passing, Darlene did find love again with Stan Kemp, who was a retired farmer and wonderful man from Heppner, OR. Together they explored the country in their RV and eventually married in 1997 after a few years of traveling.  Sadly, after only nine days of marriage and driving to Seattle to board an Alaskan cruise ship for their honeymoon, they were in a car accident and Stan, unfortunately passed.  Darlene survived to bless us with added time and her kind heart.

Darlene enjoyed getaways with cherished friends and especially enjoyed spending time and traveling with her sisters, Wilma, Norma Jean and Karen.  A lover of travel, Darlene explored the life-size clay soldiers poised for battle in China, traveled in Europe but especially loved Hawaii and Mexico where she enjoyed slowing down and taking in the sunshine.   Darlene also enjoyed Broadway musicals and the theatre and as a season ticket holder would often make the trek from Hood River to Portland to take in a show.   Always with an infectious smile, and a twinkle in her eye, Darlene warmed up the room with laughter, giving energy to those who met her.

Darlene was predeceased by her husbands, Larry M. Scroggins, and Stan Kemp, including Darlene and Larry’s oldest son, Larry M. Scroggins.  Darlene will be lovingly remembered by her sons and their spouses, Jesse M. Scroggins, (Tina), Hood River, OR, William M. Scroggins (Kerry), Portland, OR, and Lloyd M. Scroggins (Carla), Government Camp, OR & Phoenix, AZ.  As a loving grandmother Darlene will also be missed by her seven grandchildren:  Lauren, Cody, Kelsie, Cade, Tucker, Taitum, Liam, and Miguel (with whom she enjoyed providing special Christmas ornaments annually as a special remembrance), let alone numerous nieces and nephews plus her sister, Norma Jean Kritsonis and brother-in-law, Ken Guffy.  Besides her husbands and son, Darlene was also predeceased by her parents William L. and Jessie Anna (Whorrall) and sisters, Wilma (Guffy) and Karen (Hughes) including her parents-in-law, William and Blanche Scroggins and brother-in-law’s: Ken Hughes and Conrad Maurice Scroggins.

Services are scheduled for 1pm, Saturday, May 21, 2022, at The Church of Jesus Christ of Latter-day Saints, 1825 May St, Hood River, OR 97031.  Darlene’s burial will take place the following day at 1pm on Sunday, May 22 at the Long Creek Cemetery in Long Creek, OR where her late husband, Larry and many other Scroggins relatives are buried in Eastern Oregon.

In lieu of flowers, donations may be made in memory of Darlene to Meals on Wheels (https://meals-on-wheels.com/donate/donate-now/) or the charity of your choice.